„Fear and bewilderment are understandable, but they must be overcome as soon as possible, we will be close to the people affected by this sad event and help them in whatever way we can. We support all who seek to save those who are under the rubble, and we hope that for homeless people, a solution will be found quickly, for those who are out on these cold days, „the Orthodox Church said. 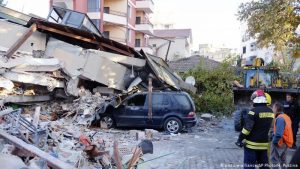 At least nine people have died and 600 people have been injured after a powerful earthquake hit Albania in the early hours of Tuesday, causing damage along the country’s Adriatic coastline and in the capital, Tirana. Several buildings collapsed, burying residents in the rubble. The 6.4-magnitude quake struck shortly before 4am local time (0300 GMT), and was the second powerful tremor to hit the region in two months. It was centred 19 miles west of Tirana, at a shallow depth of 12.4 miles. Scores of aftershocks included three with preliminary magnitudes of between 5.1 and 5.4.