The Bulgarian Orthodox Church is the most trusted institution in Bulgaria

In a study of „Gallup International“ done on the occasion 30 years of the onset of political changes in the country shows that the institution with the highest level of trust among Bulgarian citizens is precisely the Bulgarian Orthodox Church.

After brief fluctuations, after the election of Patriarch Neophyte in 2013, church confidence remains at levels between 40 and 50% and is generally lasting higher than mistrust.

Gallup points out that the activities of sects, the role of atheist government in the recent past, the lack of well-prepared clergy, the lack of sufficient respect for the church by active members of society, and others, are likely to have a negative impact on the image of the Church.

And although, in the face of atheistic Europe, trust in religious institutions is diminishing, at this point the Church is finding itself among the public regulators in which Bulgarians have the most confidence, at least compared to state institutions. 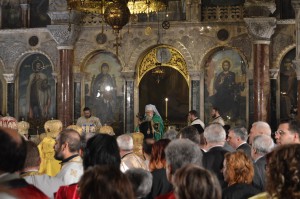