Начало / EN / Bishop of Kisumu Athanasios: For people in Africa the hope is only in God

Bishop of Kisumu Athanasios: For people in Africa the hope is only in God

We present you an interview with His Eminence Bishop of Kisumu and All Western Athanasios. Bishop Athanasios is now in a hospital in Massachusetts, USA, as he is very ill.

We pray for that Lord to have mercy on him and may the Lord’s Will be done to heal him.

-Your Eminence tell us about you

Born in remote village of Ebukhubi, Dominantly Protestant. I was one of the first orthodox in the area after my parents converted around 1980. Went to ACK primary school. Mill hill catholic high school. Went to Makarios 111 orthodox seminary graduated with diploma in theology

Ordained deacon in 1998. Sent to Holy Cross school of Theology for theology 2002 May ordained a priest after moving to South Africa through the blessing of late pope and Patriach Petros and Archbishop Seraphim then of Johannesburg and Pretoria. 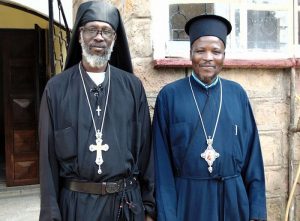 November 24  2015 new diocese of Kisumu and All Western created by the sitting of the Holy Synod. Elected it’s first bishop on the same day and consecrated in Alexandria by the pope and Patriarch of Alexandria and all Africa Theodoros II on the feast day of st Nicholas 6 December 2015.

-Your Eminence, how long have You been part of  the Alexandrian Orthodox Church and have you always been in Kenya?

I have been part of Alexandria for all my life since age of 8 years. Now I’m 47. After Kenya I went to holy cross for studies by then I served as a deacon. After four years in the United States of America I was sent by the late Patriarch Petros Vii to begging a new mission to Africans in South Africa. I stayed for 14 years before I was recalled by my Patriarch to return where I fought in the seminary for two months before I was elected as a bishop. In South Africa I was very close to Serbian community that was in Johannesburg. That’s why I knew much about Serbia and still have close relationship. I have been to Greece especially in monasteries, especially monastery of Vergin Mary in Peristeri where I’m a Brother

-Have you kept statistics over the years on that how many people have adopted Orthodoxy and how many churches and monasteries there are, not only in Kenya but also in Africa?

Kenya has a total of 1 million Orthodox Christians. The smallest fraction in kenya compared to other denominations but the biggest in Africa. Reason as to why kenya was decided into three dioceses for easy administration.

Monasteries in Kenya has been a challenge. We had one more that 20 years ago but it was closed. Right now in my new diocese where in three years as a bishop we have two active monasteries one for men under st Anthony. We got the land but we have built so we have rented for our three novices( by the way I’m asking if we can have our monk come in Serbia to train etc)

We have opened also the convent of st. Cleopatra with four seasoned nuns and three African novices. We have the land but we have not built due to finance but we have taken one of the Houses for the diocese with a chapel where the nuns are staying on a temporal basis.we may have other monasteries upcoming but as we speak it’s only in the diocese of Kisumu that we have two active monasteries

-Before believers accepting Orthodoxy, can they attend church-organized courses? 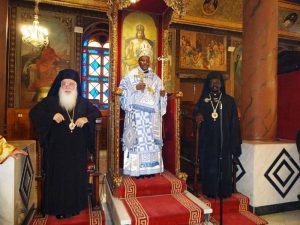 Before believers are baptized they attend classes taught mainly by Catechists. This are graduates from the seminary who have not been ordained.

–What difficulties do you find in Your pastoral work in Kenya?

Difficulties are many ranging from material because we have so many poor people. In Africa you cannot separate missions from philanthropy because just as in Galilee most people ready to listen to the message of the Gospel are vulnerable and poor people whose hope is only in God.

Another challenge is flooding of other faiths which makes it difficult to spread orthodox. Also we have to compromise between african culture and  Orthodoxy.

– How do You think Orthodoxy is accepted in Africa, other religious communities, how they accept Orthodoxy?

Orthodox in Africa is widely accepted in Africa many of her practices resonates with African traditional practices and belief.

Orthodox was never associated with the colonial powers with its own suffering in orthodox countries like Cyprus under the British, Greece under the Turks Etc this history unite orthodox with Africans.