In 2018, the Bulgarian Orthodox Church celebrates two anniversaries of one of its most important Metropolitans – the Metropolitan of Nevrokop Boris. We marking 70 years of his murder and 130 years of his birth

The Metropolitan Boris of Nevrokop has left a deep trace of life and memory of both the Christians and priests of the Nevrocopian Diocese and the life of the Bulgarian Church at large.

The future bishop Boris was born on on the feast of St. Dimitar of Thessalonica in the 1888 in the village of Gyavatto, Bitolq (today in the Republic of Macedonia). He lives modestly and poorly with his parents. In 1910, Vangel Rizumov (the secular name of Metropolitan Boris) graduated the Constantinople Spiritual Seminary. During his training he received a scholarship from Exarch Joseph, who was impressed by his exemplary and humble attitude. In 1915, as a hierodeacon, Boris graduated from the Faculty of Theology in Chernovits (Austria). After 1917, hierodeacon Boris was ordained as a hieromonk, he began even more diligently to help the godly people in his spiritual growth and perfection. It was because of this activity that he attracted the attention of the senior churchmen, who respectively summoned him in Sofia and distinguished him with the title Archimandrite and and appointed him as the protosingel of the Metropolitan of Sofia. From 1926 to 1931 he was the rector of the Sofia’s spiritual seminary „St. John of Rila“.

he Metropolitan of Nevrokop, Boris, is also a writer, he writes articles about the Church newspaper, publishes his poems and becomes the author of the famous brochure „The crisis in our school“. In choosing Metropolitan Boris as Metropolitan of the Diocese of Nevrokop, Professor Hristo Gyaurov will write: „Every nation needs not only political leaders, but at the same time, and even more than spiritual leaders. Of such leaders, the Bulgarian people now have a special need When the newly-elected Metropolitan of Nevrokop occupies his place in the diocese of Nevrokop, designated by God, he enters into the number of these leaders of the Bulgarian people”. Kanonically elected in 1935, Metropolitan Boris assumed Nevrokopian diocese. He was met with great enthusiasm in the diocese by thousands of godly Christians. 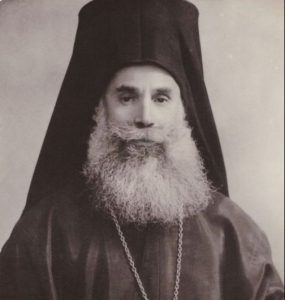 Almost immediately after his entry as a metropolitan Boris sent a  letter to his priests  at the Nevrokopian diocese, in which he designated ten principal posts of the priest. Metropolitan Boris wrote:

The shepherds of the Church of Christ must always know and remember their sacred and irrevocable duty not only to act as priests, but also to teach and train their flock, to preach to all the Word of God, to enlighten men with Christ’s truth and to warm up with Christ’s love. Therefore, according to the divine commandment of our Savior, the wise counsels and suggestions of the Apostles and the instructive example of all worthy pastors and ministers of Christ oblige all dear priests in the Nevrokopian diocese:

The next month of September, Metropolitan Boris sends a circular message to the teachers in the Nevrokopian diocese. In him he turns with heartfelt love to the teachers in the diocese. He asks them to create church children’s choirs in schools and thus to help the preaching activities of the Bulgarian Orthodox Church. Metropolitan Boris briefly created a high spiritual life by engaging many people to help in the Church’s preaching activity.

Every man has his gift, a gift from God, which he has to perfect and increase. The gift God gives to Metropolitan Boris is undoubtedly the gift of the word. A man full of sincere and pure faith, virtuous, prayerful and generous, this is Metropolitan Boris. Metropolitan Boris is one of the great minds of his time. He knows perfectly Russian, Greek, German, French, Italian, English, Turkish, Romanian and Hungarian. The knowledge of these languages ​​helped him to communicate with more and more people, among whom not all were Orthodox. He constantly monitors the emergence of new and new theological works in world theological thought. Metropolitan Boris is also distinguished by other people of his time. In addition to being well educated, knowledgeable and capable, he is above all a modest, unintelligent humble – a real proponent. 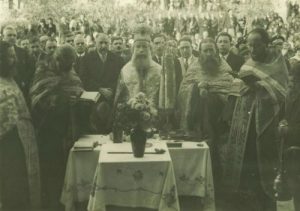 Nevrokop Boris was appointed by Holy Synod to be part of the ecclesiastical delegation sent to Constantinople on the occasion of the lifting of the schism of the Bulgarian Orthodox Church in 1945. At the end of the liturgy, the Metropolitan of Nevrokop congratulates the Ecumenical Patriarch Benjamin in Greek on the occasion of the joyful event, namely the rise of schism. Metropolitan Boris was elected as chairman of the National Assembly, which took place in the church of St. Sofia, for the election of the third Bulgarian exarch. For exarch was elected the Metropolitan Stephen.

On November 22, 1948, Church newspaper went into mourning. His Eminence Metropolitan of Nevrokop Boris past away. On the first pages of the newspaper there are the tombstones, pronounced after the funeral of the Metropolitan of Nevrokop.The metropolitan of Dorostol Michail says: „A great and inexpressible affliction presses our hearts, and the Church and the people are bitterly complaining of a heavy and irreversible loss of our beloved brother and spiritual father, Nevrokopi Metropolitan Boris, lies without breath, he suddenly became the victim of a crime unheard of in the life of our Church. At the Feast of St. Dimitar of Thessalonica, when he celebrated his birthday, after performing the Divine Liturgy and after a divine sermon metropolitan Boris was killed in the village of Kolarovo, Petrich, by an unworthy priestly priest … To complain about our separation from our dear and unforgettable brother. But as much as we mourn for him  let’s not forget that he does not need our tears. No! He needs and wants us to be faithful to our Holy Church and our people… „

Elijah Stamenov, the murderer of Metropolitan Boris, has been sentenced to seven years in prison, of whom he sleeps 3 under the mild regime, but ends in the madhouse by repeatedly saying, „I killed him, I killed him …“

On March 31, 2016, the Holy Synod of the Bulgarian Orthodox Church, after examining the letter of Metropolitan Seraphim of Nevrokop, gave a blessing to begin a procedure for the canonization of Metropolitan Boris.

The last of the 76 poems published by Metropolitan Boris sounds like a summary of his entire life:

My early age – a martyr’s cross.

My Way in Life – The Way to Golgotha“.