Начало / EN / The construction of a Bulgarian Orthodox Church in Bucharest, Romania, will soon begin

The construction of a Bulgarian Orthodox Church in Bucharest, Romania, will soon begin

His Holiness expressed his hopes in the very near future to begin the construction of an Orthodox temple for our compatriots in Bucharest. Mr. Gabriel Moute introduced the Bulgarian Patriarch with his region, which is the second largest in Bucharest with over 400 000 people. He added that in area 6 there are 24 churches and 2 monasteries.

During the meeting, the traditionally good relations between the Bulgarian and Romanian Orthodox Church were shared, and the donation that Sofia Mithropolis recently received – the garment of St. Petka of Tarnovo, whose relics are kept in the town of Ias, Romania, was reminded. The meeting was also expressed by the full support of the Romanian Patriarchate to the Bulgarian Church, the excellent attitude of His Holiness Patriarch Daniel to the BOC-BP, as well as the cooperation of Rousse Metropolitan Naum for the initiative – building a Bulgarian temple in Bucharest. 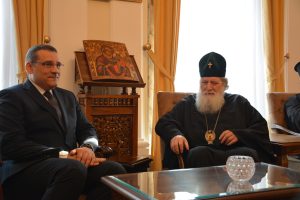 The meeting ended with the hope of a faster start of the construction of the Bulgarian temple, as well as of deepening the good relationship between the two Orthodox churches.