Начало / EN / Archim. Timothy Ntumba: Despite the poverty, the Orthodox mission is developing in Congo

Archim. Timothy Ntumba: Despite the poverty, the Orthodox mission is developing in Congo

On the pages of „Dobrotolibie“ we introduced you to the Orthodox missions that have been taking place for decades in Africa and more specifically in the African countries of RYO, Congo, Rwanda, Uganda, etc. Today we present to you an archim. Timothy Ntumba, who is archimandrite to the Patriarchate of Alexandria, and has been developing an Orthodox mission in the Democratic Republic of Congo for 8 years. The interview is specifically for the site „Dobrotoliubie“.

– Father, what was your way to the Orthodox faith? How did you get to know Orthodoxy?

– I’m Archimandrite. I serve in Bunia, which is located in the eastern part of the Congo. I am from the Democratic Republic of Congo, but i completed my bachelor degree in Theology in Greece. In this way I became acquainted with the depth of the Orthodox Church.

– What made you become a monk and serve as a clergyman in the Orthodox Church?

– I am an Orthodox priest. This was my first touch to Orthodox faith. After I became a hieromonk, they sent me to Buna, to the east of Congo. The local church here had closed doors for 20 years, as there was no priest to care for it because of the civil war that was in the area. Here I came in July 2011. Until this moment, there was no Orthodox Christian. You can visit my Facebook page and see the first Orthodox Christians I have been baptizing here.

Poverty in the area is cruel.

People can not afford to buy medicines, which makes the spread of diseases easier. Also, many of the children who visit our church are orphans.

– The Patriarchate of Alexandria is currently performing many Orthodox missions in African countries. What are the main challenges that you encounter?

– „We need many resources that we rely on donations and funding from different bodies that help us continue to develop our missionary work. The most help we try to give to poor and sick and infirm children, to those who suffer from malnutrition, to those who have remained orphans for civil war and to vulnerable and needy children who can not pay for school supplies. 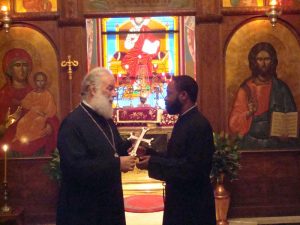 We often have to send children to a hospital, which is sometimes at our expense.

Here I use the case to ask you for support – to support my efforts. We have many kids from our parish who are very sick, suffer from malaria, and malaria also causes fever, diarrhea and vomiting. 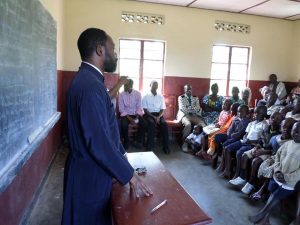 The cost of living here is very high. We need the means to maintain and continue our missionary activities and to continue to help the poor and the frail, those who suffer from malnutrition, the children left orphaned by the war, the vulnerable and, in general, everyone who needs to be helped with something.

– Leave a message for the readers of „Dobrotoliubie“.

– Thank you for giving me a tribute from „Dobrotoliubie“. I will say to your readers: Do not forget. Here, people who die every day due to lack of food and because of our inability to supply them with the necessary medicines.

Hunger and suffering have no limits here!

If you are willing to help, you can send money via Western Union or Money Gram named: Timothée Ntumba Musungayi, country: Democratic Republic of Congo.