Начало / EN / A colonel became a priest in Bulgaria

A colonel became a priest in Bulgaria

He will now perform worship every week in the church of the Military Academy.

Colonel priest from the reserve Yordan Bozhilov was appointed an ephemera of the temple „St. Archangels „at the Georgi Stoykov Rakovski Military Academy. From September, a worship service will be held every Monday, said General Director General Grudi Angelov.

The last post of army priest is the Director of the Information Security Department. He was ordained in a junkyard on 27 August 2017 in the Kremikovsky Monastery. His Holiness the Bulgarian Patriarch Neophyte also attended his ordination.

Yordan Bozhilov was born on October 24, 1960 in Lyaskovets, Veliko Tarnovo district. In 1982 he graduated from the Higher National Military School „Vasil Levski“ in the town of Veliko Tarnovo and was produced as a lieutenant engineer. He served in the regimental regiment of Land Forces in the town of Nova Zagora where he manages a telegraph platoon and company. In 1992 he graduated from the Georgi Rakovski Military Academy and settled with his family in Sofia.

After moving to Sofia, during the crisis of transition in our country, they notice with their wife that there is an incompleteness in their lives. Searching for Orthodox literature is one that answers many questions about the meaning of life and the missing things in their being. Thus he gradually senses that faith and trust in God, as well as the change in their way of life corresponding to Orthodox moral law, are the things they need. 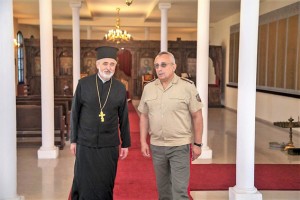 In 2004 he graduated with great success in the newly established Master’s program at the Faculty of Theology of the Sofia University with a Master’s degree in Theology, specialization „Systematic and Practical Theology“, and defended the Master’s thesis on „Military Clergy“.

Jordan Bozhilov with his wife and their grown children – sleep and daughter (their son is already family and with children), participate regularly in worship and parish life. They are actively involved in the life of the Parish Priory at the Temple where, after completing the Theological Faculty, he teaches catechism in the courses organized by the Center. Since the spring of 2005, he served as a patron of the altar of the Temple of the Most Holy Mother of God in Sofia.