With the blessing of His Eminence, the Metropolitan of Vidin, Daniel, tonight, May 21, in the cathedral „St. Demetrius of Thessaloniki“ before the start of evening worship was officially greeted the miraculous icon of the Mother of God, reports Vidin metropolis.

The Holy icon is visiting Bulgaria on the blessing of His Eminence Baltic and Ananien Archbishop Alexius. The icon is kept at the Nativity of the Virgin Mary in the village of Bayttal, Ukraine.

The story tells that the monastery was attacked and burned by Turks in the 18th century, and the icon was lost for many years. It was discovered in 2005, soon after that oozing began and many miracles occurred. Thus, once the concealed Bydgian Virgin Odigitria became one of the most famous and revered sanctuaries in both Ukraine and other Orthodox countries. Many sick received healing from various diseases, and many childless families, after prayer before the icon, had children. They expressed their gratitude with gifts that today adorn the icon. 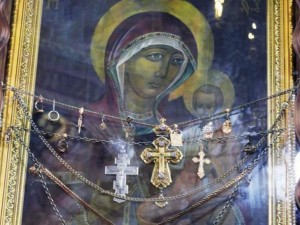 The icon of the Holy Mother of God „Odigitria Baytalska“ will remain for worship in the cathedral „St. Dimitrius of Thessaloniki“ in Vidin until 28 May.