Metropolitan Joseph was born on January 1st 1870 in Veliko Tarnovo, with the secular name Yordan Bakardzhiev. He completed his primary education in Gorna Oryahovitsa.

In 1887 he became a monk with name Joseph. In 1889 he was ordained a deacon by Parteniy, bishop of Velich. With a scholarship from Prince Ferdinand, he graduated from Samokov’s spiritual seminary. He completed his education in 1892. Then he studied at the Theological Faculty of the University of Munich. He also graduated in social sciences at Geneva University. From January 1st , 1899 to September 5th, 1905, he was a protosingellos of the Sofia Metropolis. On July 4th, 1899, he was ordained a hieromonk by Sofia Metropolitan Parteniy. On April 24th, 1904, Synod honors him with honorary grade archimandrite. On June 29, 1909, he was ordained in the church of St. Nedelya as a bishop with the title Dragovitiski. 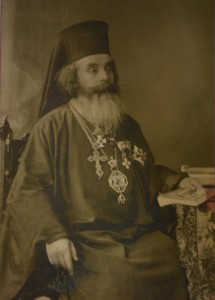 In 1913, Bishop Joseph, together with the Protopreservator Stefan Tsankov, led the mission for the conversion of the Pomaks in the Southern Rhodopes.

On September 7th, 1914 Bishop Joseph Dragovitiyski is selected and on September 21, 1914 and was canonically approved for metropolitan of Turnovo. In February 1918 King Ferdinand handed him a medal „For Bravery“ I degree. He died on April 30, 1918 in Sofia. He is buried in the Holy Trinity Monastery, Veliko Tarnovo.