The Metropolitan of Rousse Naum is visiting Mount Athos

On April 20, 2018, with the blessing of His Holiness Constantinople and Ecumenical Patriarch Bartholomew, His Eminence Metropolitan Naum of Rousse arrived on a pilgrimage visit to St. George’s Monastery „St. Georgi „- Xenophon, warmly welcomed by the abbot of the archim archimum. Alexius and the monastery brotherhood.

In Mount Athos, the Bishop was accompanied by representatives of the Balkan Athos Association – Mr. Andrey Kristov and Mr. Valentin Todorov. Worshiping the miraculous icon of St. George the Victorious in the convent of the monastery temple, according to an old-fashioned tradition, His Eminence left the gift of the miraculous image of his hieroglyphic Encyclopedia, depicting St. Dimitar Basarbovski.

The Abbot of the Holy Cloister showed to the Bulgarian Metropolitan a copy of St. George’s miraculous icon with a specially made silver shirt and wood carvings, designed as a gift for the temple „St. Georgi „in Rousse, while the bishop donated archimus. Alexius with an icon of St. Dimitar Basarbovski and embroidered archimandrite cross.

In the early morning of April 21 His Eminence Metropolitan Nahum led the Divane Liturgy in the monastery church. During his stay in Thessaloniki, Metropolitan Nahum also met with prominent theologians and representatives of the Greek Orthodox Church, who talked about various topical issues. 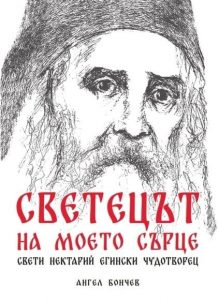